Behind the scenes with Graham McKelvie

With one week left in the run of The Four Horsemen Project at Soulpepper Theatre, we touched base with the fabulous Graham McKelvie, one of our Four Horsemen performers. We wanted to see what it was like to prepare for this insanely demanding role.

GM: No, I knew nothing of the Four Horsemen before the project. What an interesting and pleasant surprise it was for me!

GM: The very first rehearsal we started working on "Allegro 108" and I thought I was going to go insane and pulled big diva moments where I was all "I NEED A BREAK CUZ I'M GOING CRAZY!!!" ...... lol.... the work of the Four Horsemen is often not easy to learn as it purposefully deconstructs syntax. The journey was bewildering but really engaging. 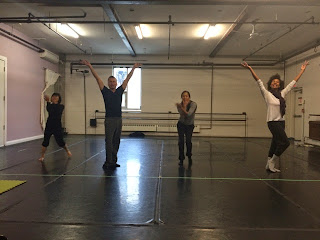 When Ross called you to say he was remounting the show, what was your initial reaction?

GM: Of course I was quite filled with joy when presented with the possibility of a remount. It's a great time for a performer to go nuts in a way one rarely gets. And the piece is by now such a familiar thing, that it's like reconnecting with an old friend.

What did you do to prepare for this remount?

GM: Initially I freaked out when I thought of preparing for the remount, but then I realized it was all still there in my brain and body and not too far from the surface. Funny thing how a brain works. 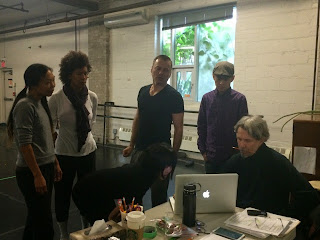 What’s your favourite “pome” in the show?

GM: My fav pome is probably, Aleph Beth. It's a lovely play on words, and the recycling of them. But in addition it is dramatically layered in a way. At one glance, it is like a serious instructional told to listeners. And on the other hand it's almost like a soliloquy, the thoughts inside the head of someone who has thought long and hard on the subject matter,  the nature of poetry always dancing around him, which is what is happening choreographically.

Be sure to ride with Graham and our other three incredible horsemen in The Four Horsemen Project playing at Soulpepper before it closes on November 22. For tickets, purchase here.
Posted by Unknown at 08:11